This isn’t a financial matter for us, it’s…hard to describe. In some ways we live very wasteful lives – we drive to work (albeit carpooling) when we could be biking, we eat one lavish meal out a month (last time out was $94 with tip and tax), we spend hundreds a month (on average) traveling, and we spoil our dog like crazy. Finding a use for something like watermelon rind doesn’t even begin to offset all this wastefulness. Yet it feels magical. Taking something most people throw away and turning that into something delicious? Yes, please. And we can assure you, these are delicious. That is, if you’re smart and don’t make way more than you could possibly eat.

There are many recipes out there, but we were lazy and wanted to complete these in a day (most involve salt brining first). We used this recipe, adapted from Momofuku, by David Chang and Peter Meehan. Haven’t read that personally, but the reviews look positive, with the negative reviews either being about high difficulty rating for home cooks or too many expletives.

In general, I very much appreciated the Kitchen Riffs author for posting this and adding his notes, with the exception of this piece: “Preparation time is about 10 minutes for cutting up the watermelon and peeling the rind, plus a minute to cook, and an hour for cool-down before you can refrigerate the pickled rind.”

Liar!!! How is the cooking time 1 minute when the brine has to come to a boil, have the watermelon rind added, then come to a boil again? Waiting for the brine to boil and re-boil seemed to take forever, which could not have been all due to us quadrupling the recipe. Anyway…pro tip: Get your brine in the pot and heating up before chopping up your rind to save some time. Also, it’s hard to know when the brine is officially boiling when the watermelon is in it (usually, we’d just stir and see if the brine was still bubbling, but with all that watermelon that was never going to happen). On our attempt, it took us about 2 hours from chopping to canning.

We had one large watermelon that probably weighed between 15-20 pounds. We started cutting the rind before settling on a recipe and ended up with larger pieces with less pulp attached than the Kitchen Riffs post.

We ended up using all the rind, clocking in at four heaping quarts, so we quadrupled the recipe and took out our giant stock pot (DO NOT DO THIS. THIS WILL GIVE YOU WAY MORE WATERMELON RIND PICKLES THAN YOU COULD POSSIBLY EAT. DON’T GET US WRONG, WE LOVE PICKLES. BUT 4 QUARTS OF PICKLES IN TEN DAYS IS TOO MUCH). We used 50% apple cider vinegar and 50% plain white vinegar, and cinnamon instead of ginger because we were lazy and didn’t want to cut anything else after all that rind.

If you have a hood fan, this is the time to turn it on. Boiling mostly vinegar produces some fumes that should not be directly inhaled. As far as I can tell, there aren’t any major health implications to this, it’s just not pleasant. The biggest safety tip for any home pickling is to go by the directions exactly with regards to water, vinegar, sugar, and salt content. Playing with the spices is another story. 🙂

Once done, the brine tastes amazing and the watermelon rind is slightly discolored. Now to wait an hour for them to cool…

He seriously loves watermelon. We make sure to take care of any seeds first, of course.

After they cooled, it was easy to scoop the rind pieces in and pour in the brine. We (unsurprisingly) filled four 1-quart jars and had a little leftover brine. 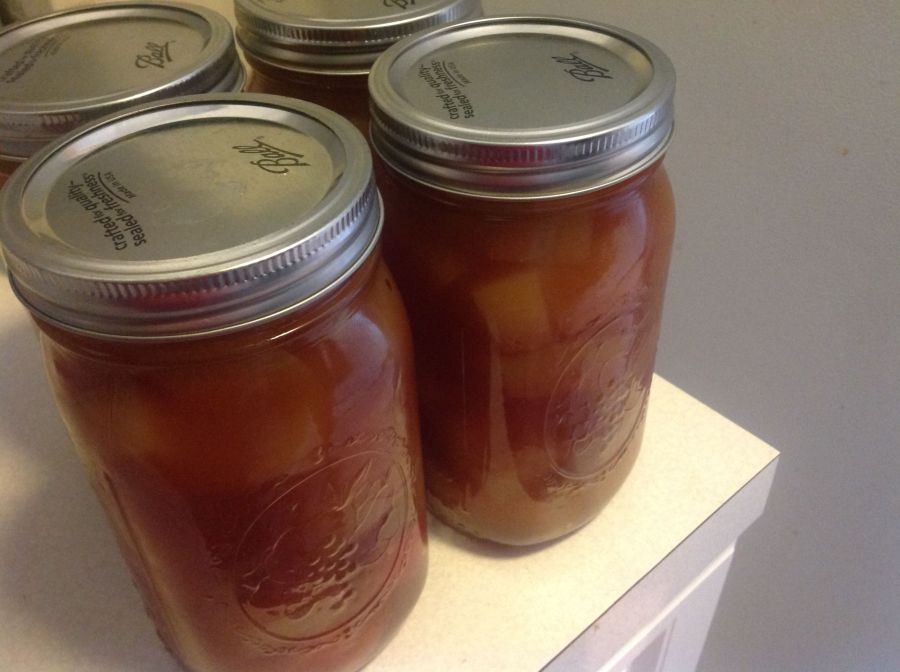 The brine was the best part of these pickles. The white watermelon rind just acts like a sponge and holds in all the juicy goodness. We had some pieces with more watermelon flesh than others, to give it a try, and they were definitely not as good. The flesh pickled in the brine was slightly bitter, with the original flesh flavor battling it out with the brine and losing.

Let’s break this out by the quart, since we know our lovely readers will not make the same mistake we did:

This assumes you were already going to buy and consume delicious watermelon, so the rind is free (all other values price checked online or at the store). As you can see, the majority of the cost is the apple cider vinegar. You can halve the cost of this recipe by only using white vinegar, which will probably still be delicious. Assuming you start the brine on the stove before you start cutting the rind, and only make a quart, you should be done in an hour, depending on how fast you can slice ‘n’ dice.

Eh…maybe? For about a dollar you can transform rind into pickles, which is fun and magical…on the other hand, this post has been sitting for months and we have yet to make watermelon rind pickles again.